We are super excited to share with you a project that some friends of X-Laser have been working on for a while. An innovative and exciting new form of laser analog controller, now available to pre-order on Kickstarter!

Back at the dawn of the laser show industry in the 1970s, laser shows were mainly controlled by skilled operators called Laserists, usually coming from an arts or music background. Laserists would literally perform each show live, usually to a pre-recorded soundtrack. Each show was different, dynamic and exciting. Fans would attend the same show over and over, since each show offered a unique experience just like a live music performance.

But as computer technology evolved, laser shows became more automated and lost their spontaneous performance qualities. Instead of a skilled performer, the job of Laserists was mainly that of a technician tasked with running and maintaining the equipment.

Radiator aims to bring back the live performance aspect to laser shows and once again make the job of Laserist synonymous with performance artist.

Radiator is a complete laser synthesizer which means that it contains everything necessary to create beautiful live, spontaneous vector and laser graphics, except for the laser projector itself. The performance controls, processing and all other functions are built-in. The output of radiator connects directly to a laser projector using the industry-standard ILDA connector. This carries signals for moving the laser beam and controlling the color. 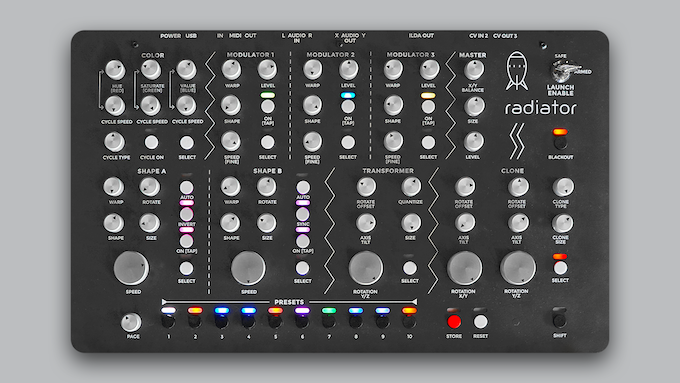 Radiator works like a music synthesizer. It contains modules that will be familiar to both electronic musicians and computer graphic artists alike. The modules work together to give virtually limitless possibilities of control.

The following are the major parts of radiator:

Radiator allows full manual hands-on control, but you can also store your creations to reuse later. The internal memory can store thousands of presets, allowing you to call up awesome creations instantly. The built-in LCD screen shows settings and also offers a preview of the laser output and presets so you know exactly what you're going to get when you "go live". 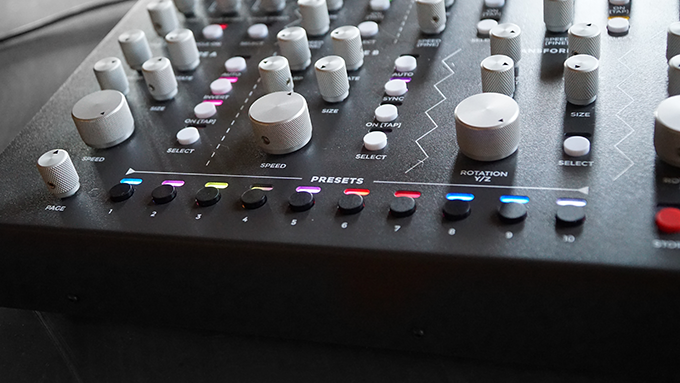 If you're a DJ or electronic musician you're probably thinking about controlling lasers from your music. Radiator comes with audio, MIDI and control voltage (CV) inputs allowing you to control your laser show in many different ways. You can trigger laser effects with MIDI directly from your sequencer or drum machine, or simply with an audio signal. Control voltage inputs allow control from an analog or modular synth.

Please note that the system and specs are subject to change based on feedback from backers like you, and the ongoing development of the project. Preliminary list of specs are presented here to give clear indication of what we intend to deliver.